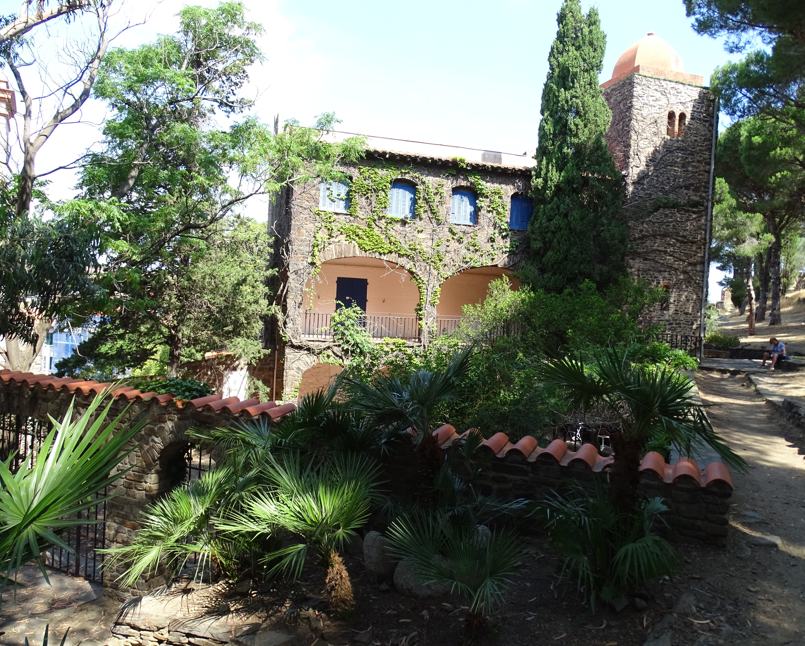 Some of us have dreamed of it, and the Collioure Museum has done it!

As part of its exhibition: “Collioure Babel des Arts”  (see article on the exhibition: web link

the Museum of Modern Art is exhibiting, most importantly to us, two watercolors that Charles Rennie Mackintosh made during his stay in Roussillon between 1923 and 1927, amongst other exhibits.

One is “The Fort Maillert” (the way in which Mackintosh named the Fort Mailly)  Port-Vendres  which he painted in 1927. This fort, now very dilapidated, appears three times in his watercolors of Port-Vendres. So it seems to be a place that our painter liked very much. He alludes to it in one of his letters to his wife Margaret, by naming it “our castle”.

The second watercolor “Slate roofs”, undated, was painted during the couple’s summer stays in Mont-Louis. Mackintosh seems also to have been very inspired by Fetges of which “the slate roofs” are a testimony.

Three other watercolors (see our Center) represent Fetges, seen from other angles.

The members of our association will discover the originals of two of the works with great emotion (we exhibit reproductions of them in our Center in Port-Vendres, with the reopening planned for August 2022).

This emotion will be further raised due to the fact that no French watercolor by our painter has been acquired, to our knowledge, by a French art lover or is part of the collection of a museum in our territory

“Le Fort Mauresque”, which no longer exists today, was the only French watercolor exhibited in France during the artist’s lifetime (Exposition des artistes Britanniques, Paris, April 20 – May 5, 1927).

Since then, there has been no trace of any work by Mackintosh exhibited in France.

Therefore this event is of particular importance for our association.