In 1925 Charles Rennie Mackintosh moved to Port-Vendres. He said he spent the happiest years of his life there. His career as an architect and designer is now behind him and he will spend the rest of his life painting landscapes: isolated buildings, small villages, street corners. Views of the coast or the mountains will now be his favourite subjects.

At that time, Mackintosh possessed a confirmed realistic watercolourist technique, a technique he had developed whilst he and Margaret stayed in Walberswick. At that time, a sense of detail and rendering of light were already priorities.

His style had changed around 1893 under the influence of the group known as ‘the immortals’, of which the Macdonald sisters were a part. Figurative watercolours had succeeded watercolours of Symbolist inspiration. Many of the watercolours of this period are known for their high level of stylization close to abstraction. These works must be placed in the context of the prevailing symbolism of the time – we can see the influence of Aubrey Beardsley, Jan Toorop and Gustav Klimt …

From 1900, Mackintosh went on painting studies of flowers. His sense of detail materialized into a great botanical precision. In Walberswick, In Walberswick, he had the project to make a portfolio that was to be published in Germany, but this project was interrupted by the declaration of war. These floral watercolours are remarkable because Mackintosh splits his subject into a multitude of colored surfaces that perfectly render the flickering of light, all made with a safer hand than in previous Symbolist works.

Mackintosh’s technique is utterly classic. The principle of watercolour is the transparency of the colors on the light (usually white) background of the paper, often left in reserve on some parts. The success of watercolour is due to the appropriate nature of the paper and the fairness of dosage between the pigments and the water. The difficulty lies in the fact that watercolour does not tolerate repeated alterations.

Mackintosh’s watercolours are highly influenced by his work as an architect, sensitive to the articulation of volumes. The graphic side predominates. Straight lines meet a clever mix of curves. The shadows are very marked, creating surfaces varied in shape and size. As a colourist, Mackintosh juxtaposes colour schemes. Whilst working outside, he sometimes took liberties. Some watercolours are thus an “assemblage” of two different points of view.

The organic structure, very present in the mineral landscapes of Port-Vendres, fascinated him. He would carefully decompose the reflections into an infinity of surfaces when he painted water.

His very detailed work on rocks has an equivalent in his study of reflections on water that he painted with great application, splitting them into an infinite number of surfaces. The composition of his watercolours is always carefully thought out. Some do not have sky (Mont Alba 1924, The City 1926, A Southern Town 1924). This alchemy between graphics and colour makes us immediately recognize a Mackintosh watercolour.

Finally, it can be observed that human presence is almost non-existent in Mackintosh’s landscapes, which makes them silent and because his gaze is so intense, paradoxically almost unreal. 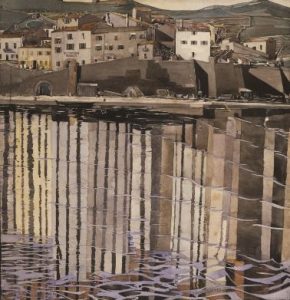 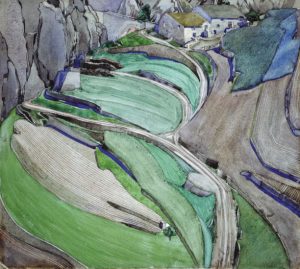 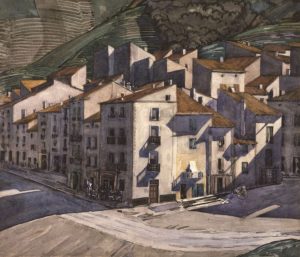 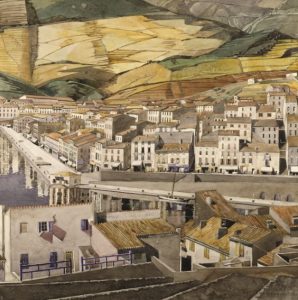